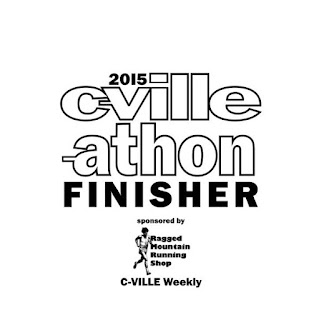 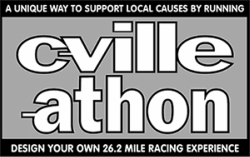 The c-ville-athon is the brilliant idea of my coach, volunteer race director, and running store owner Mark Lorenzoni. Created as a way to encourage runners to try a variety of local not-for-profit races as well as to track one’s progress over the year, the c-ville-athon allows participants to design their own racing experience by running at least 26.2 miles in charity events in a calendar year.

I worked behind the scenes to create a logo, flyers, website, and social media presence for this initiative and it was a huge success during its first year.

Of the 243 people who signed up for the challenge in the inaugural event, 83 runners submitted their checklists, running a total of more than 2,500 miles for worthy causes!

Currently we have 216 likes on Facebook and 46 followers on Twitter. We hope to increase our visibility and engagement over the next year.

Since I’ve been a race addict since 2007, it came as no surprise to me that I was at the top of the leader board for total miles raced with 98.4. Andrew Hersey came in 2nd with 51.1 miles and Kristin Morgan was 3rd with 46.9 miles.

Although I didn't PR in any distances during my c-ville-athon, I was the most proud of my Charlottesville Ten Miler time of 1:16:42 which is my 3rd fastest time in that distance (and the two faster times were on the flat Cherry Blossom Ten Mile Run course).

I had a few really bad races this year especially in the 5K (for me, anything 24 or above is disappointing unless it's the week after a marathon :) which was the Chocolate Chase after the Chicago Marathon). Luckily, I was able to finish off the year with two 5Ks averaging 7:40 pace on my Garmin and finish times of 23:26 and 23:05.

I created an evaluation form to get feedback and suggestions from the 2015 finishers. Here is a sampling of some of their kind words:

"Fun idea :-) Enjoy participating in local events and supporting local organizations; motivation to participate in an extra event or three during the year!"

"This was a great way to stay involved, get healthy, and contribute to some very good causes. Please do this again in 2016!"

"Thank you for hosting such a fun competition! I look forward to participating next year.”

"It looked like a fun thing to do, since I was planning to run several races already. I love tracking my progress."

"Thank you for putting this together! It's been really fun!"

"I thought it would be fun since I was running enough races. I told all if my running friends and we did discuss our progress especially toward the fall."

"This was such a good idea! Thank you!"

"Thank you for sponsoring such an innovative way to encourage race participation in the Charlottesville community. It certainly kept me motivated!"

"That was fun! Thanks for organizing it!"

"It was so pleasant an experience to run all those races and learn of this recognition."

"I thought it was a neat way to turn lots of little events into a bigger event; it was also great for tracking progress (or, sometimes, the lack thereof). I considered it fortuitous timing, since I had only been in town for some months, and found out about it while looking for races to participate in last spring. Being in on the inaugural edition seemed pretty neat, and putting the focus on non-profit races is quite nice."

Click on links below to register for the individual races. RSVP on facebook to let other C-VILLE-athon participants know which races you are running!
Download a checklist! 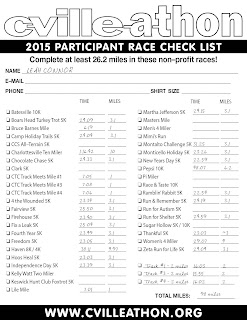 Posted by TWINS RUN in our family at 2:43 PM