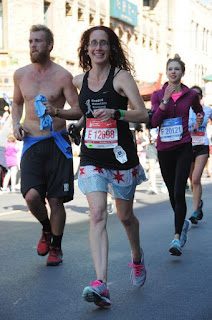 I ran my 5th Chicago Marathon on Sunday, October 9th and it was my slowest in that city by about 13 seconds.

I've qualified three times for the Boston Marathon on this course, but due to a less than ideal training cycle this summer plus a September filled with a serious sickness, extreme stress, and frighteningly low mileage, I knew hitting my A or B goals would be a stretch. However, my coach encouraged me to try because I did have a decent time at the Women's Four Miler in early September.

My plan was to go out with the 4 hour pace group and try to run a negative split. The only time I've done that was in 2008 when I ran the 1st half of the National Marathon in 2:00 and 2nd half in 1:54. I was hoping I could pull that off again, but unfortunately I just didn't have the energy. Should I have started even slower so that I could have at least run a negative split even if my finish time might have been over 4;10? I'll probably obsess & regret that when the ruminating and race dissection phase starts!

The only good thing about this year's race is I didn't feel any serious pain like I did in 2011 when I ran my first Chicago Marathon. After finishing in 2011, I wrote a post about needing a medal for dropping out because I really should have stopped running that year. So even if I felt tired and could barely life my feet off the ground at times, nothing really hurt (except MY PRIDE!)

I started more slowly than I have ever in any marathon in the past 6-8 years, but I just got slower. Sometimes sh-t happens. When you have a bad race it makes you appreciate the good ones even more. Last year I hit my goal of under 3:55 by 4 secs (3:49:56 which got me into the 2017 Boston Marathon!) and I was happy for about one hour, then I started criticizing myself because I didn't run a negative split and I didn't run even faster. This is how my mind works. Even when I achieve something, I dissect it and tear it apart. So I guess it's a little comforting to feel badly about doing badly because that actually makes sense! :)

When I was getting my post-race massage in the Balboa Tent (that experience is worth every penny!), I decided I wasn't going to end Chicago on a disappointing note. Now that I'm a "legacy" I've got guaranteed entry into the 40th running of the Chicago Marathon in 2017 and I plan to be there for my 30th and final marathon. Yes, I mean it. I've been running marathons since 2007 and it seems fitting to end my marathon "career" 10 years later with my two favorite marathons - Boston with my twin sister in April and Chicago with 40,000+ fellow runners.

One final note: When I realized I wasn't going to run under 4 hours I saw a man pushing a running stroller. He had a memorial on his back for his wife who died of ALS in July 2016 and in the stroller was a framed photo of her. I couldn't hold back the tears when I saw that. It put my "failure" into perspective. I had submitted a motivational text before the race, "Each mile's a gift! Negative split!" and seeing this man persevere through this race without his wife reminded me that indeed each mile is a gift. I'm so grateful to have been able to run so many miles with so many people I care about and who are important to me. Thanks so much to my coach, Mark Lorenzoni, my twin sister, Malinda, and all my family and friends for supporting me all these years!

Thrilled to see Joan Benoit Samuelson in the 15th floor lobby at the Hilton Chicago on Friday.. My coach told me to tell her he and Cynthia said hi next time I saw her, but alas that didn't happen. :(

Excited to see Deena Kastor sitting in the lobby of the Hilton on Saturday. (really should have had made a bingo card for celebrity runner sightings!)

Disappointed and annoyed at myself for not having a question prepared to ask Executive Race Director Carey Pinkowski at the Balboa Tent before the race. ACK!!!!!!! (also regretting not getting a photo of the huge platter of meat at Belly Up before Nicole and I devoured it on Friday!)

Happy that Rock City Skirts saw me on the course and took some pictures of me wearing the custom skirt they made per my request! :)

Loved the view from the ladies bathroom at the Signature Room. Wow!

Enjoyed the Wendella Original Architectural Tour the day before the race.

Overjoyed I caught a new Pokemon on the course!

Here are more resources on dealing with bad races:

Posted by TWINS RUN in our family at 12:07 PM No comments: