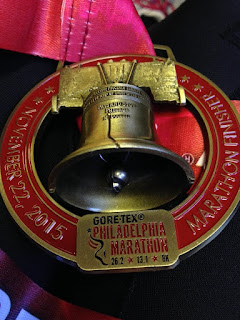 Malinda finished her 6th Philadelphia Marathon (19th marathon since 1995) on Sunday and tried for the 9th time to BQ. Unfortunately, Malinda didn't reach her BQ goal, but she did finish her 19th marathon (4:01:22).

Malinda is currently writing a recap and will post it soon. Although Malinda didn't reach her BQ goal, there is still time to help us reach her fundraising goal to support Alex's Lemonade Stand Foundation for Childhood Cancer. No donation is too small to fight childhood cancer! 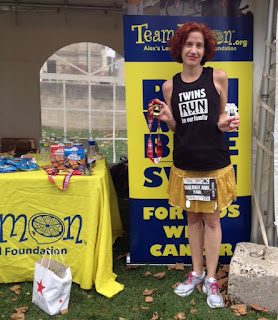 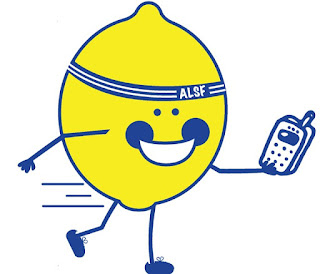 In the meantime, did you run, cheer or volunteer at the GORE-TEX Philadelphia Marathon and Half Marathon on Sunday, November 22? If you wrote a recap, please share your link in the comments and we'll add to our list.

43 Marathon and Half Marathon Recaps Listed Alphabetically by Blog

Eight Keys to a Strong Marathon (BQ at Philly) by Another Mother Runner
anothermotherrunner.com/2015/11/24/eight-keys-strong-marathon/

GORE-TEX Philadelphia Marathon Recap by Believe in the Run
believeintherun.com/2015/12/08/gore-tex-philadelphia-marathon-recap/

I was the Last Official Finisher of the Philadelphia Marathon by Be Well Philly /n Philly Mag
phillymag.com/be-well-philly/2015/11/30/philadelphia-marathon-last-finisher/

Race Report - Philadelphia Marathon 2015 by The Courage of Lungs
thecourageoflungs.com/2015/11/23/race-report-philadelphia-marathon-2015/

Philadelphia Half Marathon Recap by Fitness and Frozen Grapes
fitnessandfrozengrapes.com/2015/11/25/2015-philadelphia-half-marathon-recap/

Philly Marathon Recap by I'd Rather Be Sweating
idratherbesweating.com/2015/12/01/philly-marathon-recap/

Philadelphia Half Marathon Recap by Marathons and Macarons
marathonsandmacarons.com/2015/11/30/philadelphia-half-marathon-recap/

Philadelphia Half Marathon Race Recap by Mar on the Run
marontherun.com/2015/11/25/philadelphia-half-marathon-race-recap

Stream of Consciousness During My First Marathon by Primodelphia
primodelphia.wordpress.com/2015/11/23/stream-of-consciousness-during-my-first-marathon/

Philadelphia Marathon Recap by Running for My Life
runningformylife2015.wordpress.com/2015/11/23/philadelphia-marathon-recap/

Philadelphia Marathon Race Recap by Running with the Girls
runningwiththegirls.com/2015/11/my-philadelphia-marathon-race-recap.html

Shack Track and Field Hits the Streets for the 2015 Philly Marathon by Shake Shack
shakeshack.com/2015/11/24/shack-track-field-hits-the-streets-for-the-2015-philly-marathon/

City Prepares Security Ahead of Philadelphia Marathon by 6abc
6abc.com/news/nutter-city-will-be-secure-for-philadelphia-marathon/1089105/

The Philadelphia Marathon in photos by Philly.com
philly.com/philly/health/sportsmedicine/philadelphia-marathon/The_Philadelphia_Marathon.html

Is Race Going the Distance by Philly.com
philly.com/philly/health/sportsmedicine/philadelphia-marathon/20151120_Is_race_going_the_distance_.html

How to Avoid Hitting The Wall at the Philadelphia Marathon by Philly.com
philly.com/philly/blogs/on-the-run/How-to-avoid-hitting-The-Wall-at-Philadelphia-Marathon.html

Clothing Donation at the Philadelphia Marathon by Philly Mag
phillymag.com/be-well-philly/2015/11/24/clothing-collection-philadelphia-marathon/ 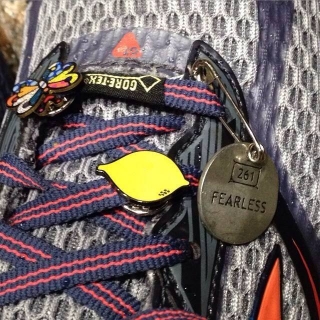 Leah and Malinda are identical twins and masters marathon moms.

We deemed ourselves "Twins Run In Our Family" so we could share our experiences running together while supporting causes we care about like Alex's Lemonade Stand Foundation for Childhood Cancer.

Since 2012, we have helped raise $2,757 to support Alex's Lemonde Stand Foundation in memory of our grandmother, GG, and Leah's brother-in-law, Michael.

Malinda, the slower 1/2 of @TwinsRun, is still trying to BQ after several unsuccessful attempts.

Malinda didn't reach her 2016 BQ goal (3:45) but you can still help her reach her fundraising goal ($345) to support Alex's Lemonade Stand Foundation!

No donation is too small to fight childhood cancer - donate $2 (or more) online!
http://www.alexslemonade.org/mypage/1121983

Have you tried multiple times to BQ? Have you run to support a charity?


Share you experiences in the comments and thanks for your support!

Posted by TWINS RUN in our family at 5:29 PM No comments: 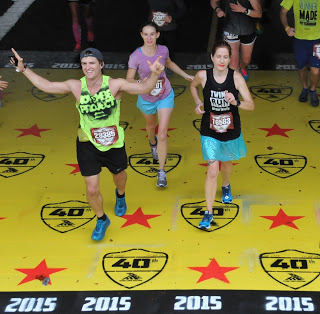 It has never been easy for me to write, especially race recaps. I admire all those who can eloquently and precisely share the details of their race stories.

To paraphrase Joan Benoit Samuelson - each race tells a story. I couldn't agree more - we all have stories to share to inspire others. Sharing stories of inspiration is one of the reasons I enjoy gathering links to race recaps. There are thousands of us - running, walking or rolling - along the course and we all have unique journeys and stories to share.

I'll try my best to share my story because I learned a lot about myself (and others) before, during and after this marathon. I'm going to post what I have now so that I can hold myself accountable and I will continue to add to my post as I gather my thoughts.

So, here is where the story begins... 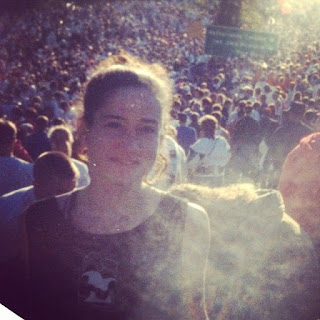 Leah took this photo at the start of the marathon 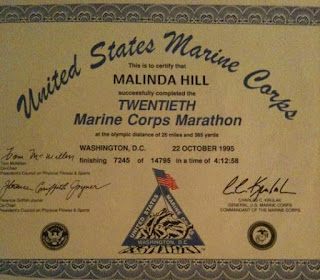 A few years ago, I decided I wanted to run the 40th Marine Corps Marathon to mark the anniversary of my 1st marathon. However, since I've been trying (and failing) to qualify for the Boston Marathon for the past couple years, I decided that I wouldn't enter the lottery and focus on training for the Philadelphia Marathon.

I continued to follow the Marine Corps Marathon on Twitter and Facebook and noticed a contest from Crystal City to win an entry. So, I entered and much to my surprise, I won!


Coincidently, I had already planned a trip to DC that weekend to celebrate my daughter's birthday. So, when I found out I won the race bib, I thought this must be a good sign.

I knew the Marine Corps Marathon course could be difficult. Although, in my "old age" I have absolutely no recollection of running the course 20 years ago. Even though I was still recovering from yet another disastrous BQ attempt at the Rivanna Greenbelt Marathon, I thought that this could be another opportunity for me to attempt a BQ.

I was starting to get excited. Maybe this would be my race. I was already writing stories in my head - 20 years after my 1st marathon I finally BQ. Then, just as soon as I got my hopes up, I got sick with a horrendous cold. I couldn't breathe and hardly ran at all during the 2 weeks leading up to the marathon.

At the same time as I was huddled under the covers, I virtually cheered Leah to her 4th BQ at the Chicago Marathon. 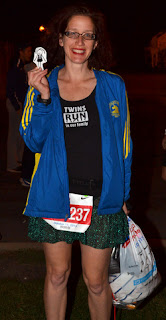 I was excited for Leah but my anxiety and doubt began to build. I was still holding on to some hope that I would recover enough to run, but I also prepared myself that this marathon could be a DNS or DNF.


In my illness induced insomnia, I decided to Priceline a hotel for Friday night so that we could get to the Expo early on Saturday and then enjoy the day in DC. Unfortunately, I somehow managed to book another hotel room for Saturday night instead of Friday night. Fortunately, my mistake gave me the opportunity to invite Leah and her kids to meet us in DC. Again, I thought this must be a good sign. Now, I wouldn't have to hire a babysitter, our kids could spend time together and Leah would be there to support me (or console me).

We were one of the first ones to get to the race expo on Saturday. We enjoyed entering raffles, trying samples and even did some push-ups.

I was hoping to attend the Runner's World seminar but I was just too sick to go back and forth from the hotel and decided it was best to conserve my energy.

The best part of the day was going to Boo at the Zoo with my daughter. We love to dress-up. 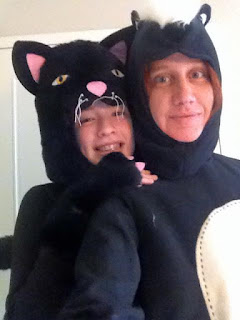 My daughter the cat and me the skunk

There were lots of fun Halloween set-ups. 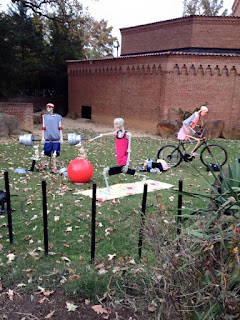 Getting some exercise done!

And, there was lots of candy! 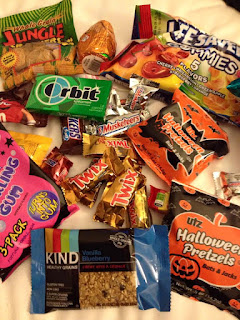 When we returned to the hotel, I set out my outfit - with an option for wet weather. 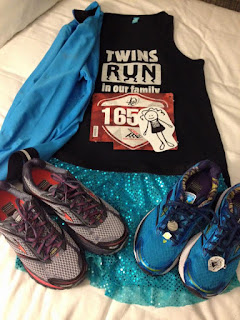 Then, my anxiety began to build again. As usual, I wasn't able to fall asleep.

So, I was planned taking the first Metro available to the start. 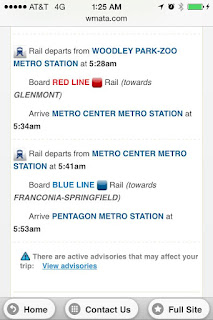 And, I mapped my exit strategy back to the hotel, if necessary. 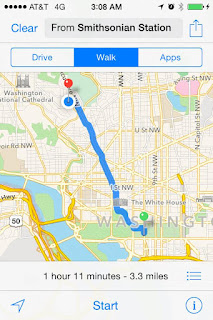 So, I finally got a couple hours sleep then got up at 3:30am to start drinking coffee to move things along. I probably drank too much and this is something I would seriously regret in 2 hours.

So, during my insomnia, I debated walking down to the Farragut West metro stop to get the 1st metro available from the blue line. But, when I woke up and checked the weather, it was raining, so I decided to just walk to the Woodley Park station less than a block from the hotel.

I got to the Metro at 5am even though I knew the 1st train wouldn't be there. Runners were starting to congregate and I was trying to rest while I could but I started to become aware that I had a bladder (curse you coffee and restroom-less Metro stations). Ugh.

By the time I switched to the blue line and got off at the Pentagon, my bladder was about to burst. Having just recovered from a bladder infection, the need to go was more painful than usual. By the time I spotted the 1st group of porta-potties, the lines were huge. I thought that there must be more coming up along the walk so I decided to wait. Big mistake.

By the time I reached the security gates, there was a huge mass of people already backe-up and not moving. I saw what I thought was a relatively short line for just 5 porta-potties, so I decided I should probably wait in line while I had the chance. I couldn't believe there were just a few porta-potties for 30,000+ runner and spectators. I kept thinking of the hundreds of porta-potties from the Pope in Philly and I wanted to cry.

So, I got in line and there was absolutely no movement in the porta-potty lines or the security lines. It seemed like everyone who entered the porta-potty spent at least 20 minutes inside. I've never experienced anything like it. The longer I waited, the more pain I was in and the more my anxiety began to build. I was in so much pain that if I could have forced myself to pee in my pants, I would have. Then, all of a sudden, a mass of people came up the hill and forced themselves through the lines for the porta-potties. It was utter chaos. Fortunately, since the lines became one free-for-all I begged my way into the next available porta-potty and at least the pain stopped.

Once I relieved myself, there was no relief from the claustrophobic crush outside the metal detectors. We were all huddled together like sardines and then it started to rain. We stood there for what seemed like forever with no information on what was going on. I was really anxious and stressed with the lack of information. I was in Boston during the marathon bombings, so I understand the need for security. However, it seemed to me that it was more of a safety hazard to have so many people crowded together with no way to get out. To make matters worse, absolutely no information was provided about what was going on. My mind started to race to worst case scenarios and my anxiety continued to build. I kept trying my best to keep myself calm - and stop myself from shivering - but nothing helped. It was absolutely the worst pre-race experience I've ever had in 20 years.

Around 7:50 we heard the planes overhead and the race start at 7:55. Then, just before 8am, it seemed as if there were just letting everyone through the metal detectors. I ran to the start and much to my surprise, I saw Rebecca (who started the Rocky 50k). Seeing a familiar face in the crowd of runners mad me feel a little better. It's amazing who you can run into (pun intended) at a race with over 30,000 runners.

Because it was raining, I turned off my phone and kept it in my top for most of the race. So, I ran without music and without texting Leah - which made running even more difficult.

The texts to and from Leah before and during the marathon. 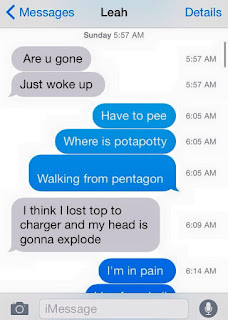 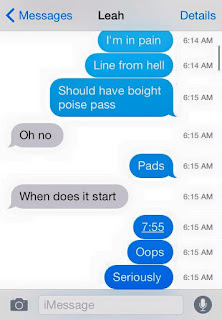 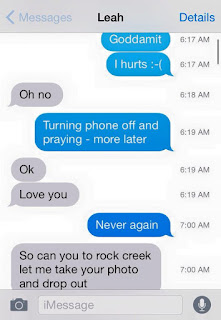 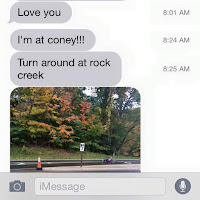 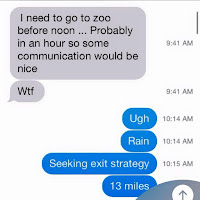 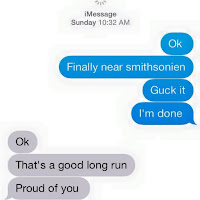 My official splits before they disappeared from the results. 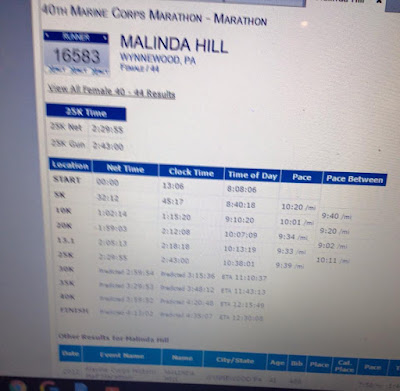 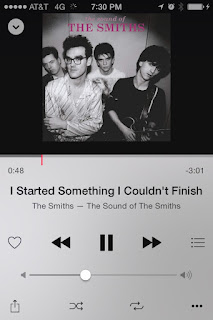 Did you run, cheer or volunteer at the 40th Marine Corps Marathon? What was your story? Did you write a recap? I encourage you to share your thoughts or link in the comments. Thanks!
Posted by TWINS RUN in our family at 5:00 AM No comments: