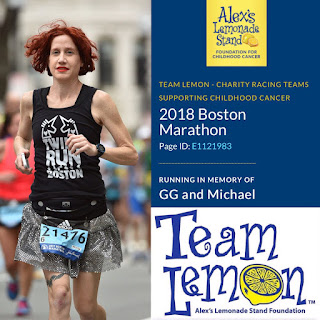 Malinda is grateful for the opportunity to run the 2018 Boston Marathon as a time qualifier (3:46:13) and charity runner with Team Lemon to benefit Alex's Lemonade Stand Foundation for Childhood Cancer in memory of our grandmother, affectionately known as "GG" and Leah's brother-in-law, Michael.

If you can, please consider donating $5: alexslemonade.org/mypage/1121983

No donation is too small to help in the fight against childhood cancer. 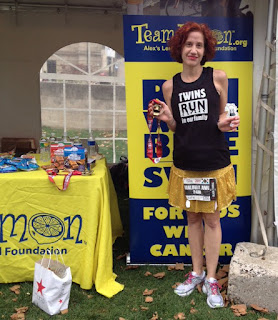 Leah and Malinda are identical twins and marathon moms who deemed themselves "Twins Run In Our Family" so they could share their experiences running together while supporting causes they care about.

Since 2012, Leah and Malinda have raised $3,951 to support Alex's Lemonade Stand Foundation in memory of Leah's brother-in-law, Michael and their grandmother, affectionately known as GG.

Malinda, the slower 1/2 of @TwinsRun, finally qualified (BQ'd) on her 12th attempt.

Malinda was grateful to run her 1st Boston Marathon in 2017 as a charity runner with Dana-Farber Cancer Institute and finish together with Leah.

Since Malinda finally achieved her BQ goal, she is grateful for the opportunity to run the 2018 Boston Marathon to benefit Alex's Lemonade Stand Foundation. 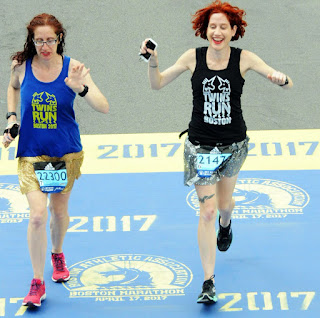 Many thanks to Competitor Running for including my story.

For the second year in a row, Hill will be running Boston to raise money for cancer research and patient and family support. Last year, she joined her twin sister Leah—a seasoned Boston runner—and participated in the marathon for the first time. She ended up raising $5,000 for the Dana Farber Cancer Institute.

Leah’s brother-in-law and the sisters’ grandmother both died of cancer. This year, Hill hopes to raise $1,000 for Alex’s Lemonade Stand, which was started by 4-year-old Alexandra Scott, who died of neuroblastoma in 2004. “Alex’s Lemonade Stand is very close to my heart since I’m the bereavement coordinator at the Children’s Hospital of Philadelphia,” Hill shared. “I know how important it is to fund childhood cancer research.”

She also continues to be inspired by how a little girl achieved so much in her short life. By age eight, Alex had raised $1 million for cancer research with her lemonade stands. The organization has since raised $150 million for cancer research. “She demonstrated how one person can inspire so many to work together to make a difference,” said Hill.

Hill will also compete in Boston this year as an official time qualifier. After 11 attempts, she finally hit her age mark at the 2016 Philadelphia Marathon, running 3:46 to qualify. “My number one goal for Boston is to enjoy every step from Hopkinton to Boylston Street,” she remarked.

Posted by TWINS RUN in our family at 12:00 PM No comments: