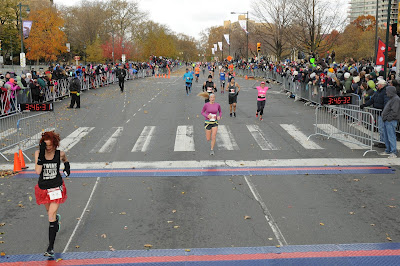 It's been a year and I still haven't been able to gather my thoughts in any cohesive order. I've never been good at writing except when Twitter was still 140 characters or less. ;-)

As I watched Shalane Flanagan's joy at accomplishing her goal to win the 2017 New York City Marathon, I remembered the joy I felt when I accomplished my goal to BQ.

There were so many meaningful moments on the road leading to my BQ. I will try my best to put those moments into words and will continue to add to this post as I gather my thoughts.

I have to start somewhere, so here it it goes...

I started running in 1994 to impress my boyfriend at the time. He broke my heart just before my 1st half marathon but my love for running continued to grow and I finished my 1st marathon - the Marine Corps Marathon - in 1995.

I finshed my 2nd marathon - the San Francisco Marathon - in 1998. I decided to register the day before the marathon with no training. Needless to say it wasn't one of my best decisions but I finished without injuring myself. ;-)

I don't remember much about my 3rd marathon - my 1st Philadelphia Marathon with Leah in 2008. I don't even remember when or why we decided to do it. I do remember that it was brutally cold. Leah and I ran together most of the time but at one point Leah was in pain and she told me I could go ahead. I don't remember finishing or how I felt afterward.

We ran the the Walt Disney World Marathon together for the 1st time in 2009. We were so focused on trying to finish that we only stopped for a couple character photos. ;-)

When we decided to run the Disney Princess Half Marathon together, we wanted to have a sister-sister team so I came up with the name "Twins Run in Our Family." At that point, Leah was already a self-described race addict and I described myself as the "go with the flow" runner.

When Leah qualified for her 1st Boston Marathon, I was so proud of her for working so hard to reach her goal. At that time, I didn't think I was capable of qualifying for Boston, so it wasn't even something I considered attempting.

When I went to Boston to cheer Leah at the 2013 Boston Marathon, I was so excited for her. Yet, at the same time, when I walked around the Expo and the streets of Boston I started to feel a little bit of sadness that I wasn't one of the runners.

Before Leah began the marathon, I thought about trying to qualify. I also thought that I didn't want the pressure of trying to run fast because I simply enjoyed being able to run.

As I watched the television coverage, I was so inspired to see Joan Benoit Samuleson finish and then talk about how she runs marathons to tell a story. Tears came to my eyes when I saw her joy at accomplishing her goal and telling her story.

I was excited when I saw the text alerts that Leah and my other running friends had finished. When Leah walked in the door, I told her to stop and go back so I could take a photo. Months later, after reviewing the date stamp on the photo, I realized that I took the photo just as the bombs exploded.

I then started to walk to Starbucks to get Leah a white mocha. Our hotel was next to the family meeting area. I noticed runners and family members celebrating but then I saw this woman crying hysterically and thought that was odd. I tweeted about going to Starbucks and then received a reply to be careful because there had been 2 explosions. At that point, I still had no idea what was going on just a few blocks away. When I got back to the hotel, I realized that something horrible had happened. I remember telling Leah there were 2 explosions and then we started to watch the news in horror.

It was so chaotic - we had no idea what had happened or why - and everything was on lock down. I was worried that something else was going to happen and that I wouldn't be able to get home. It all seemed so surreal. We had been celebrating just moments before and everything changed in an instant. Even though we were not directly affected by the tragedy, my heart was breaking for everyone affected by the bombings.

When I returned home, I couldn't stop reading and watching everything I could about what happened.

A few weeks later, I traveled to DC to run the Nike Women's Half. I was nervous but it was comforting to be there with my two mother runner friends. We even had the chance to run with Shalane Flannagan and Joan Benoit Samuelson.

After the tragedy, I knew I had to try to qualify for Boston so that Leah and I could run together in memory of those who died and in honor of those who survived.

I made my 1st attempt in Chicago, my 2nd in Philadelphia and my 3rd in Charlottesville.

I was grateful to return to Boston in 2014 so I could be on the sidelines cheering Leah and all the other runners. While I was disappointed that I had yet to qualify, I was determined that I would keep trying until I succeeded.

At some point, I hope to write in more detail about my 11 attempts to qualify. There were so many emotions and meaningful moments that I experienced.

As I prepared for my 11th attempt at the Rivanna Greenbelt Marathon, my last chance to qualify for the 2017 Boston Marathon, I felt positive. I knew the weather was going to make the race difficult but I was still hopeful that I could accomplish my goal because of all the training I had done in the heat. I ran conservatively and felt pretty good up until the last few miles. I knew at one point that 3:55 was out of reach but I was hopeful to at least finish around 4 hours. As I watched a more experienced runner suffer in the heat, barely able to walk, I knew that I had to give it all I had to finish. I finished knowing that I had tried my very best.

While I was disappointed, I tried my best not to be too hard on myself but it was difficult not to feel like I let down Leah and all those who had been rooting for me to BQ. I decided that I still wanted to run Boston with Leah and would try to be a charity runner. It's always been important to me to run for something more than just myself, so it felt got to be able to run for charity. I still hoped that I would qualify before Boston so that I could run the race knowing that I was a qualifier for 2018. But, I also knew that if I failed again, I was determined to qualify at Boston.

I began to ask myself, is this worth all the stress and anxiety and disappointment. I even asked Meb if there ever comes a time when I should consider that my goal was unattainable and he said "Never give up." He then shared a story about meeting a runner before the 2013 Boston Marathon who tried to qualify for years and finally did it.

Even though I had moments of disappointment, I was so very grateful for all the support I've received for Team Lemon. I received donations from people I only met through social media. It was comforting to know that somehow my persistence and determination inspired people to support Alex's Lemonade Stand Foundation for Childhood Cancer.

Every mile I ran, I thought of all the families I know, including my own, that have been affected by cancer. So many families have lost loved ones to cancer and many runners I know also run in memory of their loved ones who died or in honor of those who have survived. I don't take any step for granted. Each mile is a gift.

While I wanted to achieve my BQ goal, it has always been more important to me to run for a reason and support charities I care about. I kept thinking that I would run my very best but I would not let myself be disappointed if I failed to achieve my BQ goal, I knew I put everything I had into training and I was grateful that I could help raise awareness and funds for childhood cancer research.

I will continue to add to this post as I gather my thoughts. In the meantime, here are some random thoughts I wrote down last year after the Philadelphia Marathon ...

Patience
Never give up
Meb
Tears

Congratulations again Malinda -- perseverance does pay off and you're proof!