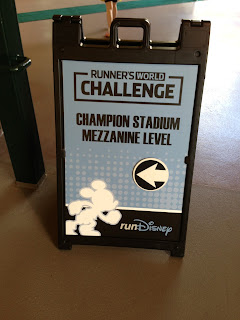 From a no-wait, amazingly easy one-stop-only packet pickup, to the VIP lounge at the Yacht Club Resort where you could randomly bump into a running idol or grab a diet coke, to an informative pre-race panel with last minute advice, to a private bus to the race retreat, to being escorting to the starting line by coach and Runner's World CRO (Chief Running Officer) Bart Yasso and seeing him again immediately after crossing the finish line ... I couldn't ask for a better experience!

When we came to pick-up our Runner's World Challenge packets we got a VIP badge and let me tell you, I felt like a VIP all weekend! I almost don't want to let the secret out about how incredible a job the Runner's World Challenge staff does for it's challenge participants, because I don't want to have to compete for limited slots in the future. This experience was worth every penny!

My initial goal for Goofy's Race and a Half challenge was to beat my times from last year (Half Marathon: 1:50 / Marathon: 3:56) but I ended up running the half 2 minutes faster and full 5 minutes slower (Half Marathon: 1:48  / Marathon: 4:01). Not too bad considering it was much warmer this year! The best part is that I enjoyed the running and stopped at almost all the character stops as long as they had an official MarathonFoto photographer. I decided not to bring my iPhone because I didn't want to bother carrying it or worry that it would get wet or broken. Luckily, I still managed to get over 20 character photos from the 2 races with photos still being identified.

The best part of the half marathon was that I managed to run my PR marathon pace consistently without having to constantly look at my watch and it felt comfortable. I had wanted to run the last 5 miles at 7:50 pace as a workout, but adjusted that goal when the temps and sun started to rise.

My revised goal for the marathon was to run the first 15 miles at 8:53-8:59 pace and then run by feel for the rest of the "race". Luckily, I met that goal. I had some anxiety that I was going to crash and burn (or melt!) around mile 16. I started having an internal pep talk with myself bargaining that if I just could make it to 18-20 then all bets were off and I could take walking breaks as needed. I knew it was doubtful that I would break 4 hours, so I stopped looking at my Garmin and took in the sites, spectators, and other runners.

The new portions of the course helped lift my spirits and I felt like I caught my second wind around mile 19. I started passing some walkers and those who were starting to fade and that energized me even more. I finished the marathon feeling more in control than I have in quite some time and even though my pace was much slower than what I wanted to run, I felt grateful I ended the race relatively pain free and with a smile on my face. It's the one and only Mark Remy sandwiched between the twins! ;-)

Congrats on a successful Goofy Challenge! I'm glad to hear that you all enjoyed the weekend as much as I did. It was really a lot of fun. The only problem is that getting back to reality afterwards is tough to do...

Congrats on an awesome race! How fun that you got all the character pictures you wanted and still were able to run so fast. It was a great weekend. Maybe next year I'll go Goofy.