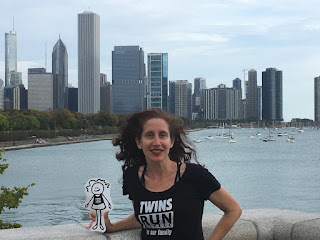 "Are you happy?" A friend texted me the day after the Chicago Marathon asking if I was happy with my race. I know that my time of 4:17:23 is my worst performance on this course by ten minutes (and is one of my ten slowest marathons overall), but I enjoyed my experience so much more this year than in the past and I’m grateful for having a relatively pain-free long run in a beautiful city with amazing crowd support.

Before the race I told everyone that this would be my 30th and final marathon ever. After two very disappointing races in the past year and a painful injury in April that sidelined me for 7 weeks, I had lost my love and motivation to train for the marathon. Five years have passed since my PR and the last time I achieved a time goal was when I qualified for Boston for the 4th time at the 2015 Chicago Marathon. The 2017 Boston Marathon would have been one of the most miserable races of my life if I didn’t have my twin sister by my side for the entire 26.2 miles. I don’t think I would have made it to that finish line without her.

Luckily I had already signed up for Chicago before that race or I probably would have ended my marathon career in Boston. If I did “retire” from the marathon, I could honestly say I had a good run (pun intended!). I achieved my goal of qualifying for and running the Boston Marathon, not just once, but four times. My first marathon was 5:17:03 and I eventually took over and hour and 40 minutes off that time to run a PR of 3:36:35. Not too bad! I had a lot of disappointments and painful races, but I kept trying … running at least 1 and up to 5 marathons a year since 2007.

When I finished my first Chicago Marathon in 2011, I was hysterically crying after the race in the hospitality tent. My training had gone so well, yet I finished well off my BQ goal. The following year when I ran my PR of 3:36:35 I barely enjoyed it because I was so disappointed that I hadn’t hit my goal of sub 3:35. Little did I know then that it would be my best time by far and only the second time I’d ever run under 3:40. I wish I would have appreciated that achievement and let myself experience the pure joy of running a great race without letting my perfectionist self find the flaws in my performance.

My training this year was not ideal. After taking 7 weeks off with no running, I slowly came back in June. Even though I ran two 20 mile runs this cycle, I almost never ran anything under 10-11 minute pace unless it was a race and I only ran a few of those. So I’m pretty happy I ran the first half of the race in 2:02 because that’s the longest distance I’ve run anywhere near a 9:20 minute pace since April and it felt comfortable. The last 8-10 miles I slowed down quite a bit, but I made the decision to just keep running at a manageable pace without pushing myself and accepted that I’d have a huge positive split (I’ve only ever run two negative split marathons.).

I don’t know if I’ll ever qualify for Boston again, but I’m fine with that now. I used to think what’s the point of continuing to run marathons if I can’t hit my competitive goals. I felt so embarrassed, sad, and frustrated (and, to be honest, like a huge LOSER!) and I just wanted to end on a high note. I didn’t have a sub 4 hour marathon or a BQ this year, but I finished the race excited about training again and that’s a victory!

Highlights of the race:


* Running with Team Lemon to support Alex's Lemonade Stand Foundation for Childhood Cancer (ALSF) in memory of my brother-in-law Michael & grandma (GG). Thanks to everyone who's made a donation to ALSF. My twin sister Malinda and I joined Team Lemon in March 2012. Together we've have raised $3,756 in memory of Michael and GG.

* Meeting Paula Radcliffe for the 2nd time (1st time was 2012 Chicago Marathon weekend) and having her hold Flat Malinda for a photograph!

* Talking to a Norwegian runner at my table who convinced me to go ask Paula for that photo. I enjoyed telling her all about my Coach and the running community in Charlottesville.

* Getting stopped by an identical twin on the way to one last bathroom break before the race. He noticed my TWINS RUN in our family shirt. We showed each other photos of our twins. J Sadly that shirt got tossed around the ten mile mark.

* Running into a couple of Irish runners who I had taken a group picture for the day before near the Field Museum. What are the odds of that!?! I got some hysterical selfies of the three of us. I hope they find the photos I posted on social media!

* Having PokemonGo Plus to help spin PokeStops and catch Pokemon with a press of a button. Wow, do I wish I had that last year!

* Hearing “Leah” and looking over to see the husband of Charlottesville running friend (she ended up running a huge PR of 3:30!)

* Getting a laugh from some spectators when I stopped to re-apply lipstick before Chinatown and then again with a mile to go (that time I dropped the lipstick and had to turn around to pick it up. Doh!)

* The Motivational Signs! Thanks to the Facebook group “Chicago Runners Unite” for having a post and comments that reminded me of my faves!

- “Remember, you won the lottery”

- This Sign is BLUE. You’re Delirious!” (on orange paper)

- I do Netflix marathons!

- A guy with HUGE pink sign with gold glitter that said “My First Marathon Sign. Yay Me!”

- Photo of a dog and said "are you all chasing a squirrel?"

- Guy holding baby and a sign that said "hurry up mom! I'm hungry!"

* After the race running into someone who follows Twins Run on Facebook and having a nice conversation and getting a selfie with her. :)

* Getting a photo of the male winner, Galen Rupp, with Flat Malinda.

* Sightseeing with my kids before and after the race. I don't think anyone should ever complain about the cost of race photos when I spent a small fortune on only 4 green screen novelty pictures with my kids at the tourist spots. #WorthEveryPenny #MyKidsWontPoseForPhotosWithMomUnlessForcedByStrangers

* Being able to check-in to my hotel at 8:30am and head to the expo alone while my kids relaxed in the room. Got my bib and shirt in about 10 minutes. Spent longer on the bus getting back from the expo then I did at the expo (which saved me lots of $$!)


Worst parts of the race:

* Struggling for 15 minutes to connect my Bluetooth headphones and then having texting issues before the race. I ended up calling my daughter a couple times while I was running to make sure she and her brother were OK.

* Squatting to pee under a bridge ... not one of my finest moments. I felt guilty, but really had no choice! :(

* Getting passed by a man in a dinosaur costume around mile 25.

* The battery in Bluetooth headphones dying exactly at 20 miles. SERIOUSLY?!?! The last 6 miles are always the hardest! Luckily the crowds were so loud and encouraging.

* Losing my shoe with an expensive custom orthotic somewhere in the Balboa Hospitality Tent or during short walk back to my hotel room. Although I was amused when I submitted a lost & found request and got an email back that linked to a “What Now?” webpage that started off with “Losing something sucks.”

* The blisters on my right foot … My big toenail hurt so badly I went to MedExpress at 7pm on Monday night to have them drain it because I wasn’t confident in my ability to stick a safety pin under my nail despite hearing stories of friends who successfully performed self-surgery. ;-) After waiting two hours I was told there was nothing to drain and given an antibiotic prescription. THIS IS WHY WE HAVE SUPERBUGS PEOPLE! After frantically calling every podiatrist within walking distance, I finally got an appointment at 10:30am. “Do you want me to pop it off?” she asked after an examination. “Uh, can we try to drain it first.” Even she didn’t think there was anything to drain, but I know my toes and I was right. She poked it with a needle and immediately there was fluid flowing. I only wish I would have taken a video of the procedure to share with the dr and nurse who didn’t even try to alleviate my pain (I had told both of them that “I’m dying, it hurts so bad, you have to do something!”). I also have a blister on the sole of my foot that the podiatrist tried to shave some skin off to help, but that didn’t do anything. I’m contemplating the safety pin.


Did you run Chicago? Write a recap? Share your link in the comments and we'll add to list!

From Dancing to Running

Keep it Light, And

In Search of My Running Tribe

Posted by TWINS RUN in our family at 9:36 AM

Had a pretty good laugh reading your post - "applying lipstick" - I can just picture you! Too funny.

Oh no - you had to pee under a bridge