Life as a twin rewarding, despite the occasional confusion 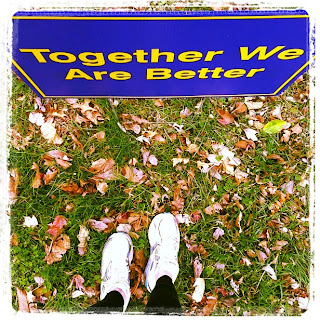 This "My Opinion" column was written by Leah Connor and originally published in The Daily Collegian on Thursday, Oct. 24, 1991. Edited by Malinda on January 31, 2013 to change the nickname she despises! ;-)

As the weeks go by, more people are beginning to recognize me from my columns. Unfortunately, I haven't actually talked to all of these people because some of them have recognized my twin sister -- not me.

So, I decided to let everyone know that there is a person out there who resembles me. To be honest, it is more like a warning --I don't think I can be responsible for the actions of my twin sister, Malinda. She might not be so nice, friendly and understanding to the next person who calls her Leah.

But who could blame her? Wouldn't you begin to get a little upset and/or have an identity crisis if people who even had classes with you don't remember you as Malinda, but instead ask, "Hey, don't you write for the Collegian?"

Personally, I enjoy being a twin. It's usually the first thing I tell people about myself. I figure it is a good conversation starter. If my twin isn't there by my side when I first meet someone, most people ask if we are identical. Here is where I sort of get stuck.

There's this genetic thing that I'm not quite sure about so I end up sounding like a complete idiot.

"Well, most people think we look alike but, to tell you the truth, I'm not quite sure if the egg split or if there were, in fact, two eggs. I'll have to get back to you on that one."

As it is common for those children who aren't the first born, Malinda and I have considerably fewer baby pictures than my older sister Heather. The excuse my parents gave me for this lack of a pictorial history is that they were too busy trying to keep both of us fed and dry. They didn't always have the time to capture the moment with Kodak.

Yeah, sure. It wouldn't be so bad if the few photos we do have weren't, well, how should I put this, somewhat ambiguous. The problem is we aren't actually sure who is who. It's always fun having my friends try to guess which baby or toddler is me. However, they are a little disappointed when they expect a definite answer and I regretfully inform them that their guess is as good as mine.

But, I shouldn't be so hard on my parents. Malinda and I have had the same problem. Last month, we were looking through some recent pictures and Malinda said, "That's a really good picture of you." At first I agreed with her, but a minute or two later (after realizing that I had never worn that outfit) I said, "Hey Malinda, that's not me, it's YOU!" It was a scary moment.

People often ask if we ever dressed alike. When we were little all of our relatives would give us identical outfits. It was always a thrill when we got matching outfits in different colors and had to fight over who got which color. However, as we got older we realized that we would have twice the wardrobe potential if we had different clothes. I must stress the word potential because it's not always feasible to borrow a sweater from your sister when you are having an argument.

Finally, most people want to know if I like being a twin. For the most part, it's great. But, this mistaken identity thing, although it is amusing, can get on my nerves. Sometimes it's not worth trying to explain to someone that I am not who they think I am. I just smile and go on my merry way. Other times people will go on talking to me without giving me the chance to say, "Hey, wait a minute, I am NOT Malinda, leave me alone."

My freshman year at Pitt I lived with six people and I didn't have the chance to let them all know about Malinda. So for the first few weeks I got the reputation of being unfriendly because I (in reality, Malinda) didn't say hello to them on the street. Therefore, I have been conditioned to say "hi" to people I don't even know just because I don't want them to think that my sister is rude.

The most memorable experience of mistaken identity here at Penn State was during the summer at Ritenour. Malinda and I ended up being there at the same time. Mistake.

The nurse kindly showed me to the doctor's office. As I nervously sat there I heard all sorts of commotion outside. Then, the nurse came back and said, "Didn't I tell you to go to the room across the hall?" I said no.

And then it hit me, she doesn't know who I am. After about fifteen minutes and a mini-conference among the nurse, doctor and a few other people, we got the whole thing straightened out. Ever since then, Malinda and I make sure to schedule appointments on different days.

Despite the occasional identity crisis and having to share a birthday, I never regret being a twin. Although even if I did, there really isn't anything I could do about it.

Not all twins get along, but Malinda is my best friend. She really understands me and not just because in the eyes of some people she has actually been me. We have a special connection. Therefore, in the hope of keeping my sister's sanity in check (not to mention for other people's safety) I'll give you some tips on telling us apart.

If, despite these guidelines, you still happen to say "Hi Leah, I like your column," to my sister and she lets you have it, please don't let that stop you from reading my next column.

Posted by TWINS RUN in our family at 7:07 AM