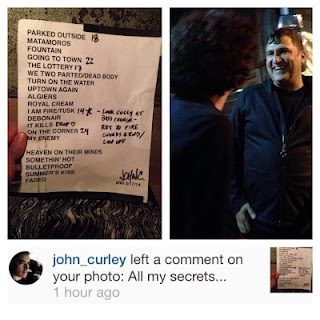 This happened. On my 43rd birthday. Greg Dulli smiled at me while I was talking to him!

I don't usually celebrate my birthday - or rather our birthday since I'm an identical twin.

And, I've never done anything special on New Year's Eve.
Luckily, thanks to Melissa, Anne and the rest of The Congregation, I celebrated New Year's Eve in 2012 and my birthday tonight.

It has been an incredible journey (music, running, races and concerts) since Melissa, Anne and I first met at The Afghan Whigs reunion concert at The Bowery Ballroom on May 23, 2012.

While I have been known to live tweet or Instagram a concert or a race, tonight was not the time or place. I refrained from all iPhone use except for one photo with Melissa and Anne before the show and a photo with Greg after the show.
I was pleasantly surprised to see that most of the audience respected the band's request. Greg politely asked one guy not to use a flash and that was it from my perspective. Of course, I was fortunate to be directly in front of the stage so it was easy to be fully present in the moment. 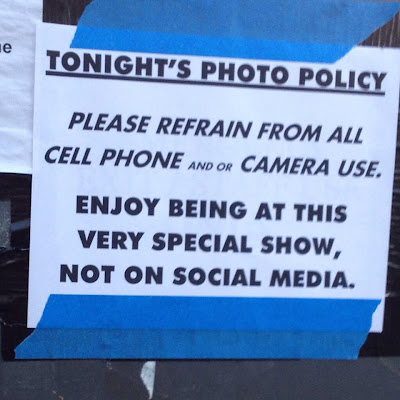 During most of the shows I attended in 2012, I took at least a few photos or videos to share since amateur photography was encouraged. Tonight, I was grateful for the no photo policy so I had no temptation to take photos. I enjoyed being fully present at this show with no distractions from digital devices.

Similarly, I used to love to tweet and run. Tweeting while running was a way for me to connect with other runners. It served its purpose at the time but now I prefer to tweet before and after my run so I can focus on running in the moment and feeling the music while I run.

While I find the most meaning in music and running while I'm alone, I still race and go to concerts for the camaraderie. For me, concerts and races are all about the stories and the connections.

I do hope to write more about my moments and stories. But, it's easier for me to write in 140 characters or less.

In the meantime, please read this post by MamaDeak: Brooklyn, Boston, Baltimore - Maybe I Should be a Roadie. I am always inspired by Anne and her willingness to share her thoughts.

Thanks again to Greg Dulli, John Curley, Melissa, Anne and The Congregation for a night filled with music, joy, laughter, inspiration and gratitude.
Posted by TWINS RUN in our family at 6:59 AM