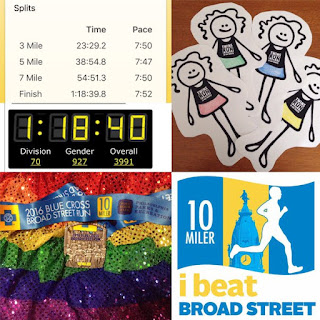 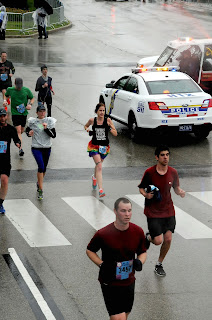 That was one wet, cold race.
Did you beat Broad Street?
Did you cheer or volunteer?
Share your story or recap in the comments and we'll add to our post!

I Beat the Broad Street Run by Sarah Katz
law.temple.edu/voices/beat-broad-st/

Broad Street is Upon Us by Mainly Running
mainlyrunning.com/2016/04/30/broad-street-is-upon-us/

Philadelphia's Broad Street 10 Miler - It's Raining, It's Pouring by Scoot A Doot
scootadoot.org/2016/05/06/philadelphias-broad-street-10-miler-its-raining-its-pouring/

Kim:
This was my first race since my 5ks in high school cross country (10 years ago). After high school I gained a bit of weight and worked a desk job. I took advantage of the free donuts and celebratory pizzas one too many times. Anyway, March 2015 I finally decided to change myself. I started tracking my food and joined the gym. The first day I got on the treadmill I couldn't even run a minute! I was so out of shape and winded. Once I could finally run a mile, it was a slow one (for me). A year later here I am 53 lbs down and crushing 10 miles in the rain. I am very proud of my pace/time! Next year I plan on moving up a corral. The beginning was rough trying to get around people. I felt amazing Sunday. I stressed out thinking I couldn't do it or I would be really slow but I amazed myself and currently looking for a half to sign up for!

Sara:
Alex and I ran our second tethered Broad St and beat our previous time by 2 minutes and change. Our time was 1:32:14. We've never had a rain race together and it caused a lot of anxiety for Alex the first mile. Overall though, great race with so many great spectators and volunteers in spite of the weather!

Meghan:
I had to transfer my bib this year :-( but I had a great time cheering on my husband, and everyone else I knew or just randomly yelled at! This was my first time actually seeing the elites during a race, which was cool. I started watching at Temple (I saw you! Can't miss the skirt!) and then hopped on the subway to get to mile 9 once I saw my honey. I made it with minutes to spare. All in all, spectating is fun but I can't wait to run it again!

Posted by TWINS RUN in our family at 8:00 AM

Janelle @ Run With No Regrets said...

Thanks for linking to my post! It was an experience like no other! I'm so glad that I ran it this year.

Thanks for sharing mine! Such a fun race!!