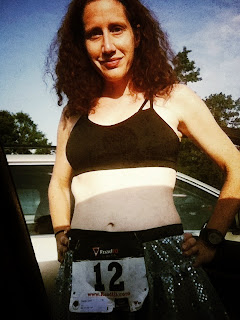 Sometimes having a good race doesn't necessarily involve earning a new PR or running a fast pace. That was the case on Saturday July 7th at the Waynesboro Summer Extravaganza 10K.

Having just raced the Independence Day 5K three days earlier, and suffering through the brutal heat wave for nearly a week, I knew I wasn't going to even try to PR (currently 45:11) or improve on my time from last year (47:49). My heat-adjusted, Plan B goal was to maintain an 8:00 pace. However, when I eyed the competition at the starting line I added the goal of placing in the top 3 of my age group (I had placed 2nd last year).

I started off towards the front of the group. I knew that I couldn't go out too fast or I would pay dearly in the last couple miles when the sun would be even stronger. I was thrilled when I reached the first water stop. I didn't drink anything, but instead dumped two cups on my head. What a relief! I poured even more water over my head at the other two water stops along the course and know it's what kept me running strong.

When we reached the point of the turn-around at mile three I started to count the women ahead of me. One... two... three... That was it! I was in 4th place!

I realized there was no way I was going to catch any of those women so my goal was to just maintain a comfortable pace for as long as possible (hopefully until the finish line). I felt even more confident when I saw the next closest woman was nearly a minute behind me. Even if all the women ahead of me were in my age group, I would still easily place 3rd, unless I hit the wall and had to walk. I was determined not to let that happen.

During the 2nd water stop around mile 4, I decided to make a small surge and pass the two guys I'd been closely following the entire race. I love it when I pass anyone during a race, but I especially enjoy it when it's a guy ! :) Not only did I pass at least 4 people during the race, more importantly, I didn't get passed by anyone after mile 2. I felt like I was making good race day decisions and it was paying off!

It took awhile for the race results to be posted, but when I saw I was 1st in my age group, 4th female, and 19th overall out of 75 participants I felt awesome! 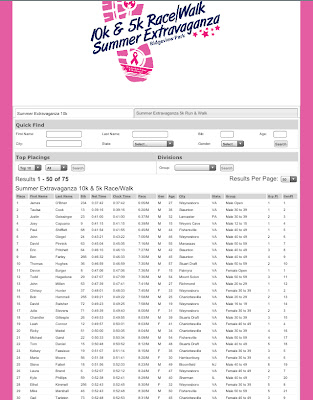 The course had a lot of rolling hills, but after mile 1 (which I probably did run too quickly now that I think about it), my next 5 miles were pretty consistently paced, varying by 4-17 secs per mile.

So my "recovery week" in marathon training was during a heat wave and included a 5K, a 10K, and total road mileage of 39. I sure hope it cools down by Saturday when I have to run a 17-mile long run! 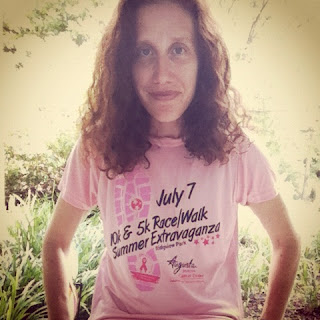 Posted by TWINS RUN in our family at 8:46 AM

I enjoy reading your blogs. I don't run quite as much as you do but I also did a 5k last week in Staunton. It was really hot but I managed to do pretty well for me and even eked out a new PB (by just a few seconds). I'm not really wanting to do any more races till maybe September though! I get too wrapped up in wanting to do PBs and it's just really muggy now. Great that you didn't get passed. I love passing people, particularly in latter stages of a race, when you know that your better planning/conditioning is really paying off!

Hi Bert! Thanks so much for taking the time to write. When Malinda saw Joan Benoit Samuelson at the Cherry Blossom 10 Miler Expo, Joan said it's better to start slow because it's always better to pass than be passed at the end. Love it! :)